Paper or plastic? It’s the age-old question customers prepare for when stepping up to the cash register. But come Monday, customers at Ray’s Food Place will have to use paper or bring their own bag.

In California, the Cupertino City Council and Glendale City Council each voted unanimously last night to bar stores from distributing single-use plastic bags within their respective city limits. The vote came after lengthy comment from residents, activists and public officials in enthusiastic support of the ban.

Crescent Beach is a majestic place, bounded by thick forest and rocky headlands that jut from the sea, rounded and bird-covered to the south, sharp like sails to the north.

It's also, as Marc Ward has discovered, a "plastic sink," one of the spots along Oregon's coast where thousands upon thousands of plastic fragments spin out of the North Pacific Gyre and settle into high-tideline sands.

In the final day of the legislative session on Friday, the State Senate failed to act on AB 298, a bill to ban single-use plastic bags statewide. This bill would have been a major step forward in protecting the Pacific Ocean from plastic pollution, according to EnvironmentCalifornia.org.

Every year, it seems, the California Legislature can't bring itself to pass meaningful legislation to reduce the number of plastic carryout bags in the state. On year, in fact, the Legislature bowed to the industry and instead of allowing a small fee on the bags, banned cities from imposing fees on them.

That's too bad because, as the Times editorial board has pointed out numerous times, a small fee on the bags is the better way to go, as fees in such diverse places as Ireland and IKEA have shown. That way, people still have the convenience of the plastic bag if they really want it; at the same time, the prospect of paying even a few cents cuts down hugely on their use; at IKEA, the number of such bags used dropped by about 90% within the first year.

To have uniformity across Santa Cruz County, each of the four cities in the county and county government for the unincorporated areas need to have their plastic bag bans and paper bag laws. That may eventually happen. The Capitola City Council is scheduled to consider a ban for their city Thursday night. But while Watsonville has a plastic bag ban set to start in September, Scotts Valley is still mulling over a similar action. 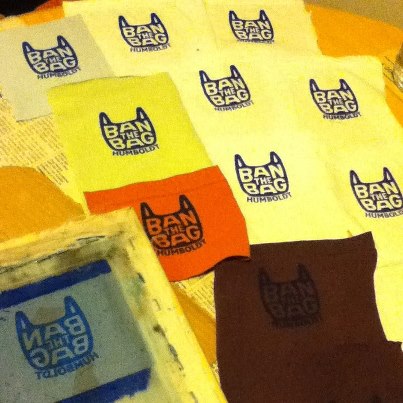 Join Humboldt Baykeeper at the Eureka Co-op this Sunday, August 26, from 11 am to 3 pm to support a county and state-wide ban on single-use plastic bags.