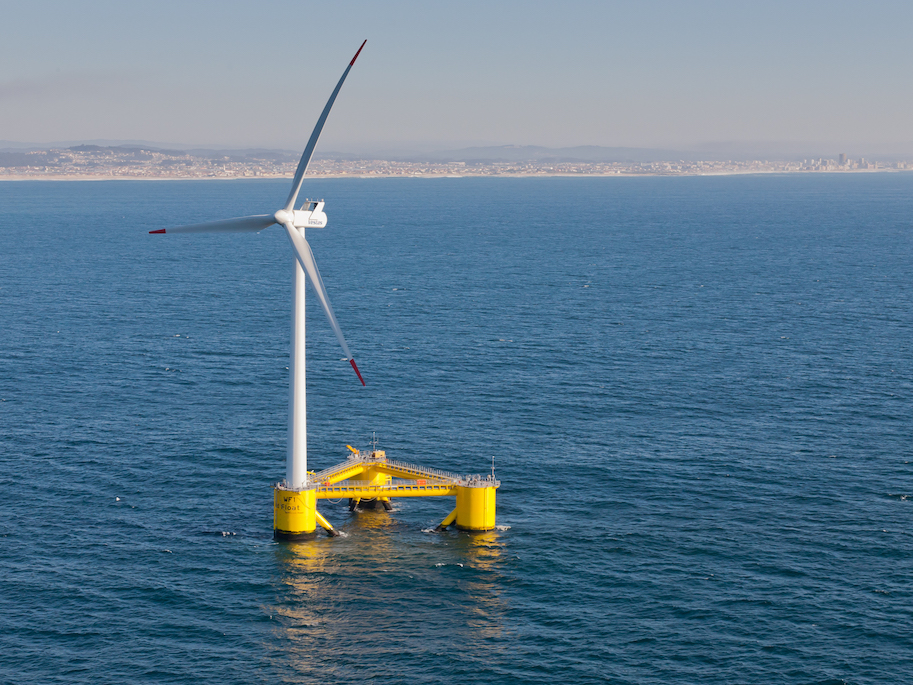 The Humboldt Bay area may become the site of the first offshore wind energy project on the west coast of North America. The pieces are quickly falling into place for Redwood Coast Energy Authority to become the first local government entity to apply for a commercial offshore wind lease from the federal government. Unlike land-based projects, this lease bid would be just the beginning of a series of studies and related permits that could culminate in project development in 5-7 years.
RCEA is preparing to submit a “lease bid” with an established offshore wind company for a pilot project 20-30 miles offshore that would include 10-15 floating wind turbines.
Why Off the Humboldt Coast?
Why here? In short, we have wind, and lots of it. While this is not news to anyone, it may come as a surprise that this stretch of coast has some of the highest wind energy potential in North America. And when the U.S. Navy raised concerns about new offshore wind along most of the California coast last November because of potential conflicts with military activities, federal waters off Humboldt and Mendocino Counties (two of the few places that the Navy greenlighted) became the focus of wind energy proponents. Humboldt Bay is regarded as a good fit for such a project, with docks for building the floating wind turbines, a coastal population center and power grid tie-in, and no barriers to block barges needed to tow the 600-foot tall windfloats from the docks to the open ocean. Many are hopeful that floating offshore wind can help move the state away from fossil fuels.

In 2015, the State of California adopted requirements to shift energy production to 50 percent renewables by 2030, along with other energy goals aimed at slowing climate change. State legislation also requires the state to double energy efficiency savings by 2030. In California, solar, wind, biomass, and geothermal are considered renewable energy sources, while large hydropower from dams and nuclear power are not. Solar energy systems, which have expanded exponentially in recent years, stop producing at night—so until better electrical storage capacity is developed, wind energy is one option for generating electricity at night.

The offshore energy lease bidding process is unlike the process for development projects in California. Federal waters are regulated by the Bureau of Ocean Energy Management (BOEM), which also manages the lease sales for offshore oil and gas drilling and exploration. RCEA is moving quickly to submit a lease bid. By jointly submitting a lease bid with an offshore energy company, RCEA is able to retain some measure of local control over potential offshore energy development.  If a lease is granted, RCEA will have the exclusive right to seek BOEM approval for development. The lease grants the right to use the lease area to develop Site Assessment Plans for surveys and studies. That plan must be approved by BOEM before studies can be conducted. Only after these phases are complete can construction plans be submitted for approval.

Although there are concerns for marine mammals, seabirds, fisheries, and impacts to commercial fishing, local environmental advocates are cautiously optimistic about the potential for a major shift away from fossil fuels.

A wide range of studies will need to be done within the lease area since there is very little scientific information on wildlife populations so far offshore. In addition, not a lot is known about impacts of floating wind turbines, since the technology is fairly new. But we do know that replacing fossil fuels with renewable energy is critical to slowing climate change—not just rising temperatures and changes in rainfall patterns, but the rate of sea level rise and ocean acidification as well.

For more information on offshore wind and other local energy projects, tune in to Jen Kalt’s February 22, 2018 interview with RCEA’s Executive Director Matthew Marshall in the KHSU EcoNews Report archives. You can also download the podcast on iTunes or any major podcast app.