Humboldt Baykeeper addresses water pollution on a case-by-case basis, and provides information to encourage Humboldt Bay residents to take action to address the problem of toxics in our environment.

Historic industrial activity continues to impact the Bay along with the health of local residents and the area’s economy. Dioxin, heavy metals, petroleum products, and other contaminants persist in areas where they were used in the past, and continue to enter Humboldt Bay through storm water and ground water discharges.  Humboldt Baykeeper works to stop this ongoing problem by seeking cleanup of these sites.

One focus of Humboldt Baykeeper’s Toxics Initiative is the past use of wood preservatives at dozens of lumber mills that once lined the shores of the Bay and its tributaries. The mills used the chemical pentachlorophenol (also known as "penta") which led to the release of contaminants such as dioxins and furans. Accidental spills and illegal dumping of these chemicals resulted in soil and water contamination. For example, the former Simpson Plywood Mill, and an adjacent drainage swale that discharges directly into Humboldt Bay, was heavily contaminated by dioxins and furans. Through Humboldt Baykeeper’s Toxic Initiative, this ongoing threat to Humboldt Bay was identified, and has been the subject of clean up activities to eliminate this source of dioxin.

In 2006, Humboldt Baykeeper petitioned the State Water Resources Control Board to add Humboldt Bay to California’s Threatened and Impaired Waters list under Section 303(d) of the Clean Water Act.  As a result,  Humboldt Bay was listed for dioxin.

Humboldt Bay was listed as Impaired by PCBs under Section 303(d) of the Clean Water Act in 2002, based on levels of PCBs found in fish tissue. PCBs have been demonstrated to cause a variety of serious health effects, including cancer and serious effects on the immune system, reproductive system, nervous system, and endocrine system. For more info on PCBs and their health effects, click HERE.

In 2012, a statewide survey of coastal fish found the highest mercury levels in Humboldt Bay leopard shark. In 2016, the California Environmental Protection Agency funded our Humboldt Bay Mercury Assessment to study mercury levels in fish and to identify communities most at risk of exposure. Phase I of this study was completed in 2018, and Phase II was funded in 2019. 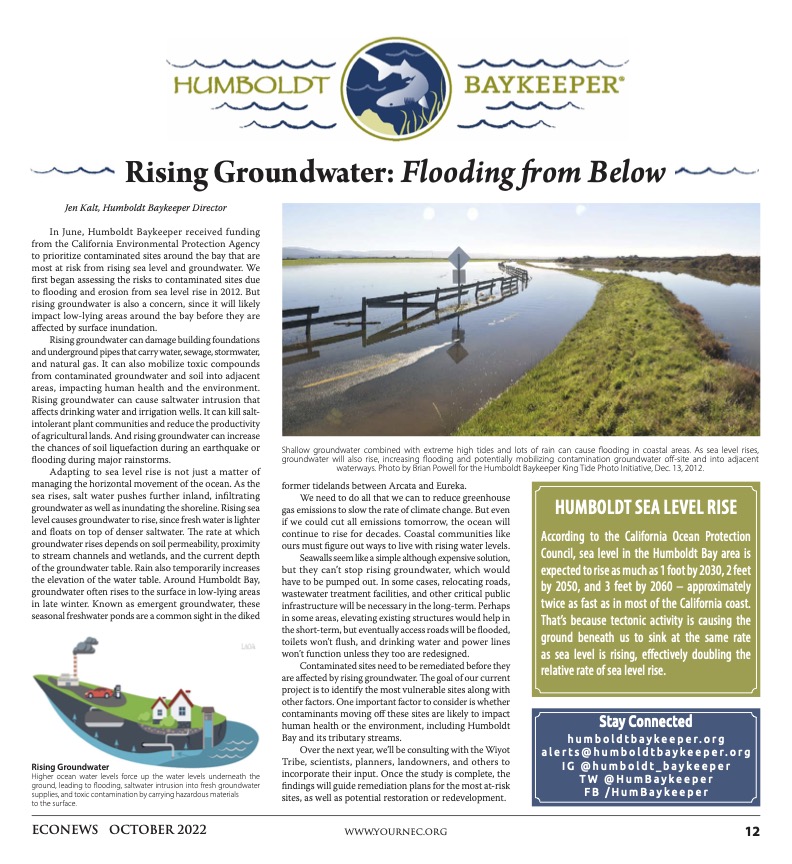 Humboldt Baykeeper recently received a grant from the California Environmental Protection Agency to prioritize contaminated sites around the bay that are most at risk from rising sea level and groundwater.
We first began assessing the risks to contaminated sites due to flooding and erosion from sea level rise in 2012. But rising groundwater is also a concern, since it will likely impact low-lying areas around the bay before they are affected by surface inundation.
Read More 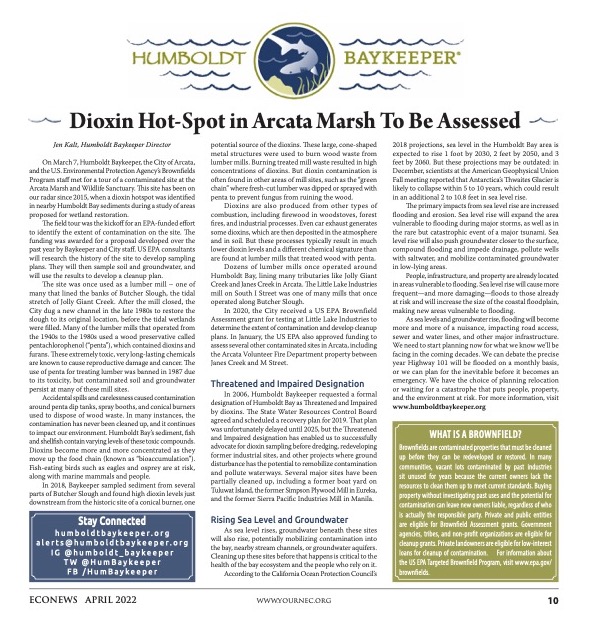 On March 7, Humboldt Baykeeper, the City of Arcata, and the U.S. Environmental Protection Agency’s Brownfields* Program staff met for a tour of a contaminated site at the Arcata Marsh and Wildlife Sanctuary. This site has been on our radar since 2015, when a dioxin hotspot was identified in nearby Humboldt Bay sediments during a study of areas proposed for wetland restoration.
Read more ... 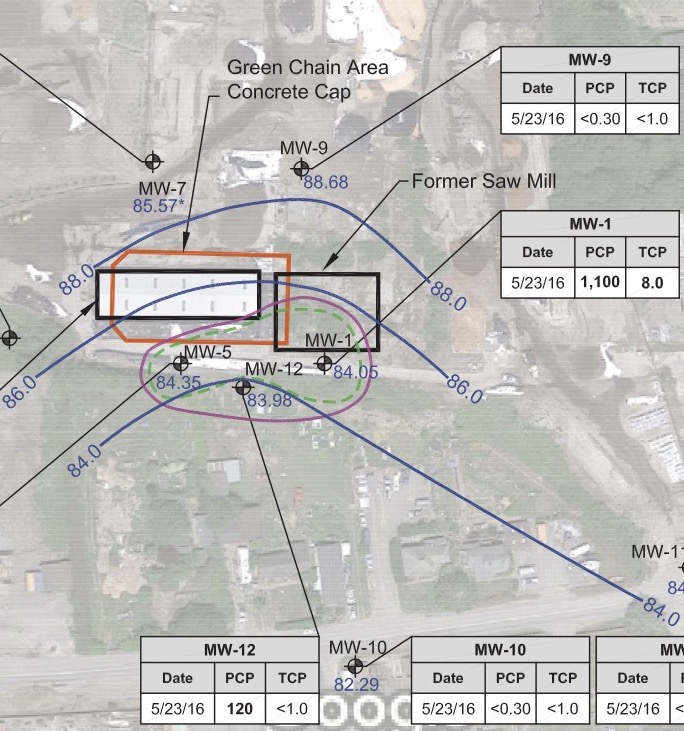 More than a decade after declaring an “Imminent and Substantial Endangerment” to public health from contaminated groundwater near the Mad River, the State Department of Toxic Substances Control (DTSC) is finally resuming work to determine the extent of the dioxin plume and to plan next steps to protect the region’s drinking water.
In December 2020, DTSC approved a contract with SHN Consulting Engineers and Geologists to identify how far contamination has spread toward Mad River from the former McNamara & Peepe Lumber Mill. The site is between Arcata and Blue Lake, about one mile upstream of the drinking water supplies for nearly 90,000 people in the Humboldt Bay area. This includes Arcata, Eureka, McKinleyville, Blue Lake, and the Samoa Peninsula.
Read more ... 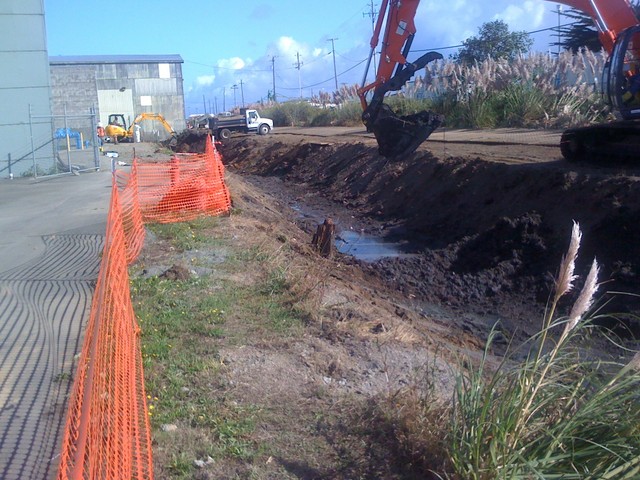 In 2008, Humboldt Baykeeper, Ecological Rights Foundation, and Californians for Alternatives to Toxics successfully settled a lawsuit against Simpson Timber Company to require the cleanup of dioxin-contaminated tidal wetland channel at the former mill site adjacent to Humboldt Bay and the Del Norte Street Pier in Eureka. Dioxins are extremely toxic compounds that cause reproductive damage and cancer. Dioxins bioaccumulate in fish and shellfish, concentrating as they move up the food chain, harming humans and wildlife alike.