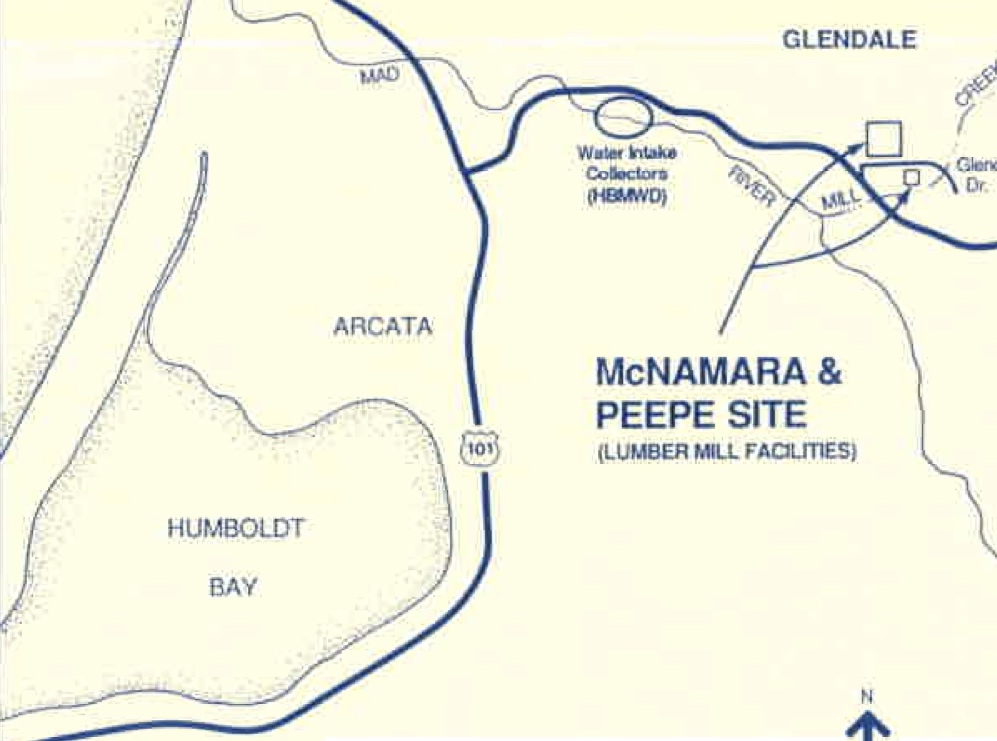 In December 2018, the California Department of Toxic Substances Control issued a stunning announcement: the concrete cap at the former McNamara & Peepe lumber mill in Glendale has failed to contain groundwater contaminated with the highly toxic wood preservative pentachlorophenol. The 1998 Remedial Action Plan has been rescinded, and the agency will now develop a new plan to remediate and/or control the contamination.

The potential for contaminated groundwater to move off-site is especially concerning because of its proximity to the Mad River, which is the source of drinking water supplies for more than 80,000 people in Eureka, Arcata, McKinleyville, Blue Lake, Manila, Glendale, and Fieldbrook. The Mad River is also considered critical and/or essential habitat for salmonids, candlefish, and other aquatic species.

Recent groundwater monitoring has found elevated levels of cadmium, chromium, lead, and pentachlorophenol, a wood preservative used to prevent fungus. This fungicide, known as “penta,” was used at the mill until 1984, shortly before it was banned for use on lumber due to its high dioxin content.

There is a long history of contamination and regulatory violations at the McNamara & Peepe mill and other nearby mills. In October 1968, a penta spill from the adjacent Molalla-Arcata Lumber Mill caused a massive fish kill in the Mad River. State wildlife biologists reported that more than 10,000 steelhead were killed immediately following the spill. In January 1969, the McNamara & Peepe mill spilled the chemical into the Mad River.

After the second spill, the penta dip tank was dismantled and penta was applied in a building on south of Glendale on the site known as the McNord Lumber Company. In 1985, DTSC issued a Notice of Violation to McNamara & Peepe for improper disposal and storage of hazardous wastes and for operating a hazardous waste site without a permit. The company declared bankruptcy shortly thereafter.

In 1986, the mill was acquired by Blue Lake Forest Products, which declared bankruptcy in 2002, leaving California taxpayers to foot the bill for ongoing monitoring of the site, which had been “capped” with concrete to prevent mobilization of contaminated groundwater toward the Mad River.

It is unclear to what extent soil at the McNamara & Peepe site has been tested for dioxins, a highly toxic compound that was a component of penta-based wood preservatives. Dioxins are an extremely persistent group of chemicals that still may be present in the soil at the site, as they have been found in the soils of many former lumber mill sites in Humboldt County, as well as in Humboldt Bay sediments and creeks downstream from mill sites.

In 2006, Humboldt Baykeeper succeeded in getting formal recognition of dioxin contamination in Humboldt Bay. At that time, development of a recovery plan was scheduled by the North Coast Regional Water Board for 2019 but has been delayed. Several major dioxin sites around the bay have been remediated in the past decade, but we face an uphill battle to get the remaining sites cleaned up, despite the threats they pose to human health and the environment.

In some cases, these former lumber mills are long gone, along with the companies responsible for the contamination left behind. The City of Arcata purchased one such property – formerly Little Lake Industries on South I Street along Butcher’s Slough – and is planning soil and groundwater sampling with US EPA Brownfields funding.

Humboldt Baykeeper advocates for sampling and remediation of these former mill sites wherever possible, whether through commenting on re-development proposals, reviewing sampling plans, or through legal action when necessary. We will review and comment on the DTSC’s next steps for ensuring that the McNamara & Peepe site is no longer a threat to the Mad River, its tributaries, and our region’s drinking water supplies.

DTSC's mission is “to protect California’s people and environment from harmful effects of toxic substances.”

More information about these contaminated former mill sites in the Glendale area is available at the DTSC’s EnviroStor website.