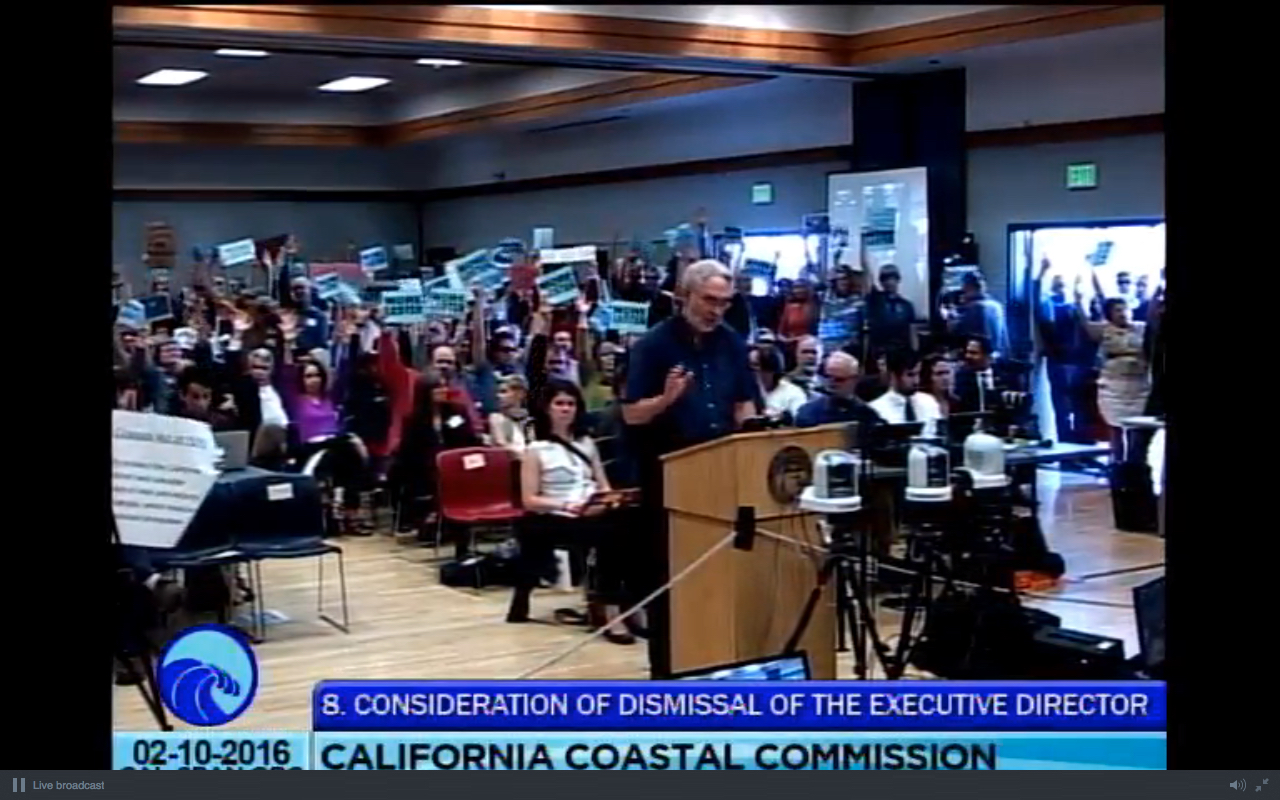 2/11/16
More than 1,000 people went to the Coastal Commission hearing in Morro Bay to support Dr. Charles Lester, the Commission's director since 2011. More than 250 people testified in support of Lester, calling for an open discussion.Only one spoke in favor of firing him.

Despite their own attorney's advice that they were free to discuss it publicly - and despite shrill complaints of being misunderstood and falsely accused - a majority of Commissioners voted to retreat to a closed meeting to vote. These seven Commissioners have destroyed their credibility and can no longer be trusted to enforce the law voted in by the people of California in 1972. Our deepest thanks go to everyone who participated in this momentous hearing, especially Commissioners Mary Shallenberger of Clements and Carole Groom of San Mateo County for their strong statements in support of the Director.

Our North Coast representative on the Coastal Commission, Martha McClure of Crescent City, voted to fire Dr. Charles Lester. One of her chief complaints? The 49-day rule for permit appeals, which is codified in state law. It says appeals must be heard in 49 days unless the applicant waives the deadline. Nothing Dr. Lester did (or didn't do) could change that.

Commissioner McClure is not being forthright. She complained bitterly about being misunderstood, defended her dismal voting record, and then voted to retreat to closed session to discuss firing Dr. Lester. The vote was reported out of closed session with no explanation. We are left to wonder why 7 of 12 Commissioners did this.

Unfortunately, despite numerous attempts, Commissioner McClure has not been responsive to Baykeeper's concerns in her 6 years on the Commission - even when the 101 Corridor Project was before the Commission here in Eureka, McClure failed to respond to our calls and emails, although she did make time to meet with CalTrans. She is one of 4 Commissioners who serve at the will of the Governor, who can remove them at any time.

Dr. Lester's accomplishments over the past 5 years are impressive: a $3 million budget increase, the largest in memory; legislative authority to levy fines for landowners who block coastal access; development of a policy to address sea level rise in coastal development; much improved relationships with local governments updating their coastal plans; tremendous increase over the last two years in non-white job applicants (from 15 to 51%) and new hires (34%); implementation of the Commission's first strategic plan - to name a few.

Yet as Vanessa Miller, the Commission's Executive Secretary, said,
"each accomplishment is met with new obstacles; it seems that it's never enough."

Regardless of what happens next, there are now tens of thousands of concerned, voting Californians who are now more aware than ever of the importance of the Coastal Act and the Commission that is appointed to uphold it. Most of them are local elected officials - local elections matter!

Humboldt Baykeeper will be among the many coastal advocates watchdogging the Coastal Commission's next steps. Stay tuned for ways you can get involved to protect our beloved coast and beaches.  Of course, you can always help by donating to support our work - our community support helps us respond to issues knowing we speak for many in support of the bay and coast!