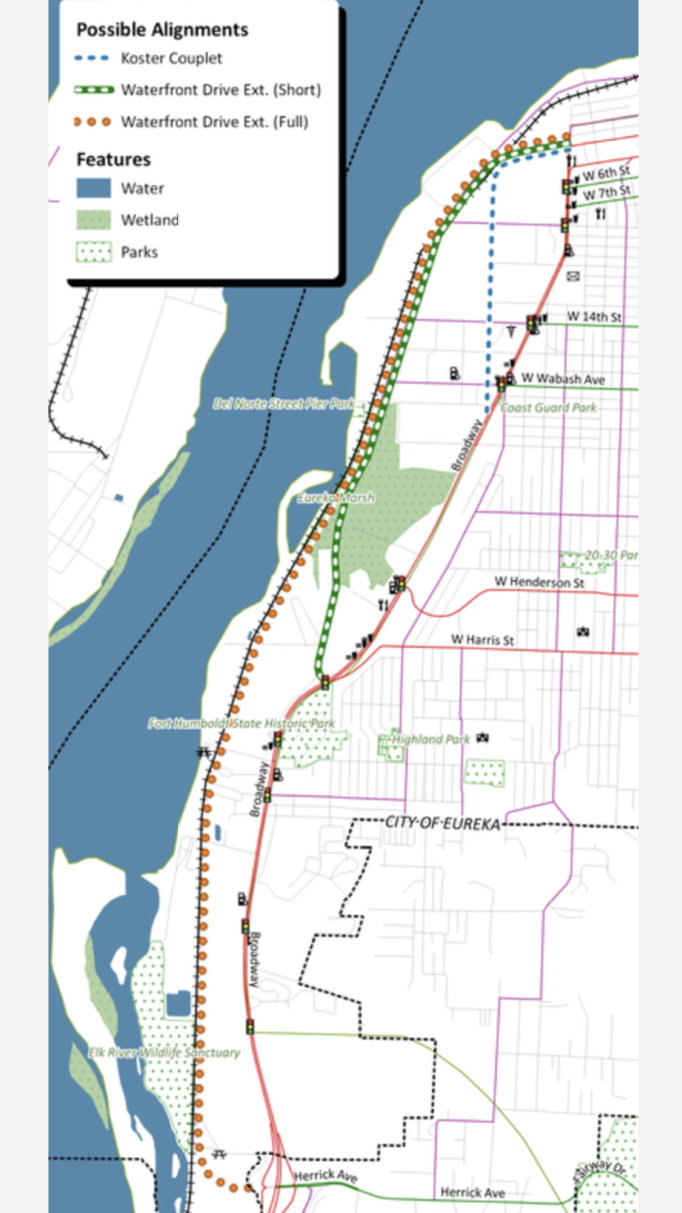 On Wed. Nov. 13, 2019, public officials made clear that new roads through Humboldt Bay wetlands are being considered as part of a proposed multi-modal transportation plan.

This was workshop #1 on the Eureka 101 Broadway Multi-Modal Corridor Plan, which intends to reduce congestion by "providing more transportation choices...while preserving the character of the local community and creating opportunities for neighborhood enhancement projects."

You can submit comments on the Eureka 101 Broadway Multi-Modal Corridor Plan website. You can also add comments about specific locations on an interactive map at the project website.

Urge our public officials to:

1. Drop the plans for new roads west of Broadway! These fatally-flawed proposals are a waste of public resources. Building new roads in coastal wetlands is not allowed in California, and for good reason! These areas are valuable habitat and are in areas at risk of flooding, liquefaction, and tsunamis, and are expected to be impacted by sea level rise in the foreseeable future.

2. Initiate a region-wide visioning process to gather public input starting at square one - without predisposed solutions like new roads.

3. Focus on multi-modal transportation to reduce traffic congestion, including projects that will make walking and biking along and across Broadway safe.

4. Focus on ways people can walk and bike from neighborhoods to the Waterfront Trail.

Although it is described as a multi-modal plan, the website announcing the workshop shows options for new roads through Humboldt Bay wetlands west of Broadway. "Possible alignments" include Waterfront Drive Extension through Palco Marsh, which was rejected by the Eureka City Council in 2012 after a decade of public opposition. A 2005 letter from the Coastal Commission advised the City that the project was a waste of resources because it would never be approved.

The other "possible alignment" is the Koster Couplet - a new road through the Balloon Track, a contaminated former rail yard that also contains coastal wetlands. A 2017 internal CalTrans memo cautioned that “Besides the briefly discussed environmental issues, be aware that this site has been the subject of politics and lawsuits by environmental groups. These activities will likely renew if the project is launched and will assuredly cause scheduling difficulties…Similar projects to mitigate contamination of railway properties have cost the project proponents tens of millions of dollars and taken several decades to accomplish.”

Alluding to Baykeeper’s 2006 lawsuit, among others, CalTrans seems well aware that the Balloon Track cleanup was never done - and will take many years to complete.