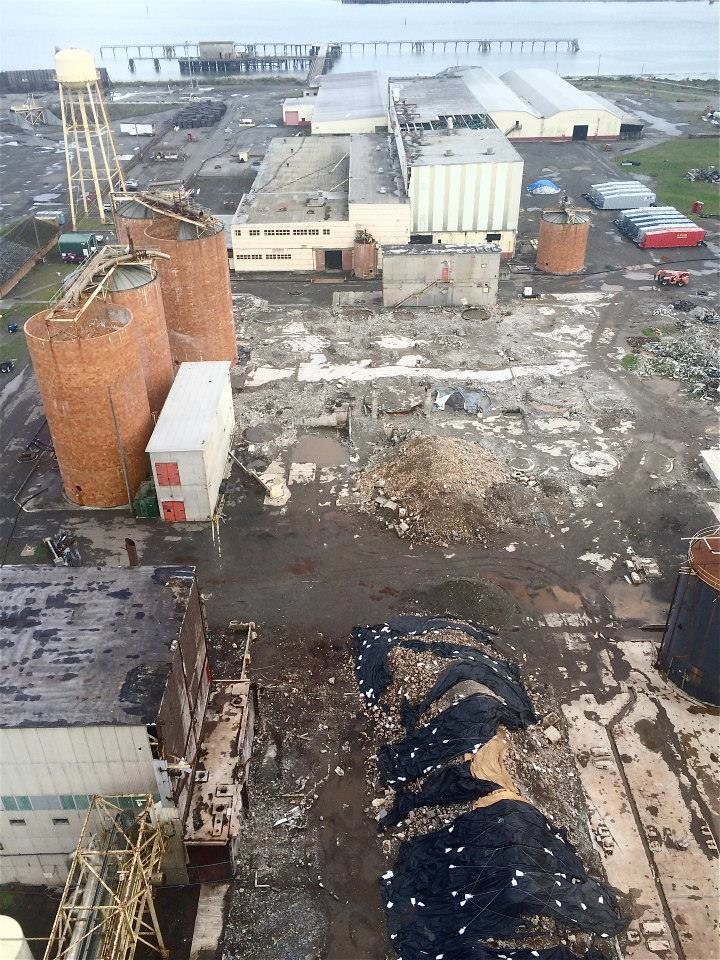 On February 11, 2019, the Humboldt Bay Harbor, Recreation, & Conservation District voted unanimously to approve a $20,000/year, 3-year “Option Period” for the company to secure all the necessary permits, and a 30-year lease agreement with two 10-year options for its former pulp mill site in Samoa, giving Nordic AquaFarms / California Marine Investments, LLC site control while it develops plans and pursues permits for a land-based fish farm.

Despite assurances that their goal is "full disclosure," the Harbor District did not provide the lease agreement in advance of Monday's public hearing, which was announced Friday afternoon, unnecessarily creating a climate of distrust rather than an opportunity for meaningful public input.

Photo of the site in 2014 by Jennifer Savage, Surfrider Foundation.

Nordic AquaFarms proposes to build a facility that they say would use a mixture of fresh and salt water to raise 33,000 metric tons of steelhead or Pacific salmon, discharging 12 million gallons of effluent daily through the existing ocean outfall, which extends 1½-miles offshore. Remodeling the former pulp mill would also include removing the smokestack and other unused structures at the site along with other improvements. The project appears to be highly speculative, since it would be far larger than the company’s “Sashimi Royal” facility in Denmark, which produced 1,200 metric tons of yellowtail mackerel in 2017.

Besides questions related to the sheer size of the operation, many concerns will need to be addressed as this proposal moves forward, including:

Company representatives have promised to stay away from genetically engineered (GMO) fish and growth hormones. They have also said that they plan to use fish feed with less than 10 percent fish content to minimize consumer health concerns related to PCBs, dioxins, and mercury exposure. Minimizing the fish content in the feed is also essential for preventing harm to wild forage fish stocks, which are being overharvested all over the world.

Other than these verbal commitments, Nordic AquaFarms’ proposal is in the beginning stages, with no concrete details available at this time. Numerous permits and public review processes will be required by various state and local agencies.

Humboldt Baykeeper is in contact with opponents of Nordic AquaFarms’ proposal in Belfast, Maine, which has been in process for several years. Although the site itself is quite different (a forested area adjacent to a river), reviewing the company’s permit applications for the Maine proposal has given us a helpful preview of their proposed operations.

We will continue to research and review Nordic AquaFarms’ proposal, and will keep our members and the community informed of opportunities for input.

The Harbor District’s agenda and press release on the lease agreement is posted at http://humboldtbay.org.

The lease agreement is posted HERE.