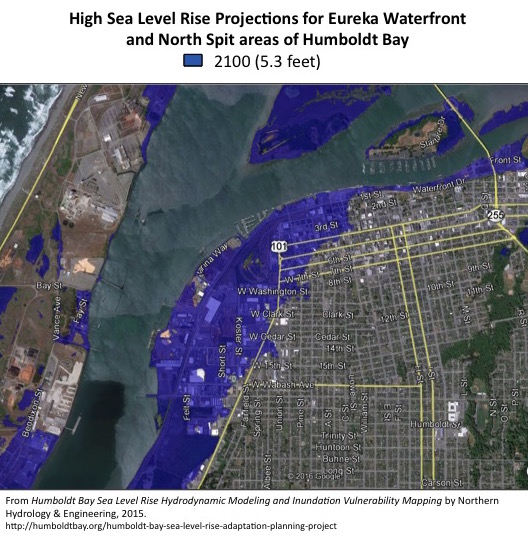 The City of Eureka is one of several local jurisdictions to receive state grant funding to develop sea level rise policies for its upcoming Local Coastal Program (LCP) Update, which governs coastal development within certain areas of the city.
The Eureka Planning Commission will discuss draft sea level rise policies, which could result in coastly damage in areas vulnerable to flooding by planning for only 6 inches of sea level rise by 2050, rather than 2 feet as recommended by the Coastal Commission's Policy Guidance. The City's staff report includes several policies that do not compy with the Coastal Act, including shoreline armoring for new development, and also calls for lobbying the Legislature to change the Coastal Act rather than planning for the future. This approach is at odds with common-sense strategies to plan for the future and could undermine the credibility of state-funded work underway to assess local sea level rise impacts.
Location: Eureka City Council Chambers, 531 K Street in Eureka
For More Info: