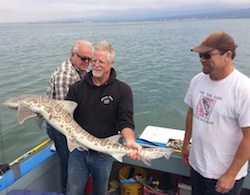 When it comes to a recent Humboldt Baykeeper study of mercury levels in Humboldt Bay fish and shellfish, the group’s director Jennifer Kalt said there’s good news and bad news.

The study found that men, women and children of all ages should avoid ingesting unsafe levels of mercury by taking leopard shark out of their diets. The study also recommends women under 45 years old and children avoid eating lingcod above 10 pounds.

Weekly serving amounts for other species — such as bat rays, California halibut, black rockfish — are also recommended to be low, according to the study.

However, Kalt said it was good news to learn that Chinook salmon, clam, mussels and other species could be safely eaten at higher quantities.

“It’s not about scaring people off of eating fish altogether,” Kalt said about why they conducted the study, “but there are a couple in Humboldt Bay that are to be avoided and a couple that are considered to be high enough in mercury that they should be consumed in moderation, especially in children.”

With Humboldt County’s largest bivalve bash — the Arcata Main Street Oyster Festival — fast-approaching, oyster and shellfish lovers can rest a little easier. Based on mercury levels in oysters from Humboldt Bay, the study recommends men, women and children limit their oyster consumption to 7 servings per week.